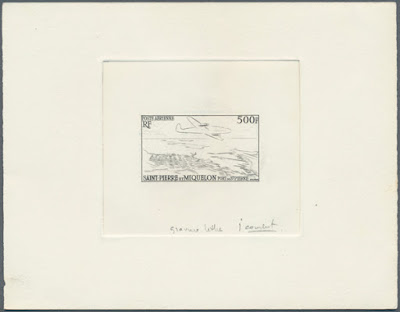 Jacques Combet was born in 1920. He was educated at both the École des Beaux-Arts in Paris and the École Estienne in Paris. At the latter, he studied copper engraving and the stamp engraver Raoul Serres was one of his teachers. The engravers course Combet followed was part of a ‘book art’ course, enabling Combet to have a career as a book illustrator as well as a stamp engraver.

Combet’s career as a stamp engraver started in 1950, when the famous stamp engraver Albert Decaris asked him to engrave the framework around a 100f airmail stamp he was engraving of a View of Paris. This must have been a successful collaboration in the eyes of both, for they repeated the exercise in 1956, when Combet took care of the lettering on a 500f St. Pierre et Miquelon airmail stamp otherwise engraved by Decaris. Combet’s first proper stamp followed in 1951, when he engraved the 2f value from the Holy Year set issued in Monaco, depicting St. Peter’s Keys and the Papal Bull. 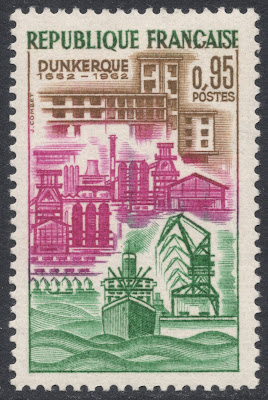 In 1958, Combet started engraving stamps for France. His first stamp was a portrait stamp, of the chemist Berthollet, part of the ‘Scientists’ set. A highly traditional portrait, but Combet would go on to experiment in portraiture, culminating in the 1984 ‘Celebrities’ set for the Red Cross Fund, in which he incorporated two different portraits of the same person on each stamp.

Just as innovative were his artistic views on townscapes. This started of in 1958 as well, with a set having ’Municipal Reconstruction’ as its theme. Although only two values were engraved by him, the 12f depicting Le Havre and the 15f depicting Maubeuge, the whole set was designed by Combet, and it shows his clever way of depicting city views, by stacking up several buildings onto one picture. The exercise was perfected in 1962, with Combet’s stamp marking the 300th anniversary of the cession of Dunkirk to France. Slightly more traditional, but still a distinctive and attractive bird’s eye view of St Germain des Prés in Paris, was his engraving in 1962 for the final booklet in a series of biographies, entitled ‘Ceux qui créent nos timbres’ (Those who engrave our stamps). 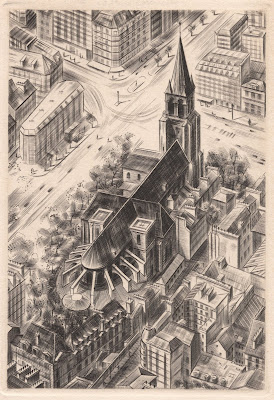 But by his own admission, Combet loved best to engrave stamps depicting nature. For examples of these, it is best to have a look at the French Southern and Antarctic Territoris, for whom he engraved a series of stamps depicting marine life, with the odd mouflon or cat thrown in.

Finally, Combet usually gets praised for his engravings of art works. He contributed quite a number of stamps to the annual French Art series, and in 1963, he even won the Grand prix de l’art philatélique for his stamp depicting the stained glass window at the church of St Foyes de Conches.