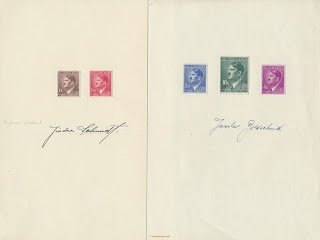 Jaroslav Goldschmied was born in Prague on 14 August 1890, the year that saw one of the more serious floods of the river Vltava. Jaroslav's early youth would be synonymous with that river, as they lived on its banks. Whether it flooded, as it often did, or froze over, it left this young lad with indelible memories and impressions, and it is no wonder his beloved Prague features so often in his private art.

It would even crop up in his stamp engravings, but only very infrequently, the most memorable being his 1953 definitive depicting the Charles Bridge in Prague. This was actually a design by the engraver Bohumil Heinz, but he had passed away when it was finally used, and as his engraving was on copper, which was unsuitable for the transfer rollers in use by 1953, Goldschmied was asked to make a new engraving in steel based on Heinz's line drawing.

Although the Goldschmied family had been one of carpenters for decades, Jaroslav's father broke the mould and became a medal engraver. He managed to enthuse his son as well, and the young Jaroslav came to work in his father's firm at the age of 14. He would also start a three-year course of engraving at the nearby school. In all, Jaroslav would stay at his father's firm until mid 1915. He would engrave not just medals, but many other items as well, such as letterheads and business cards.

After World War One, Goldschmied thought it was time to stand on his own two feet and he founded his own engraving company, which unfortunately only survived some five years. Finding himself in need of employment, he joined the printing house of the Czechoslovakian Graphic Union in 1923. He would stay with them until his retirement at sixty. The printer's director was rather pleased with a letterhead engraved by Goldschmied and figured he would do well in the stamp engraving business. As luck would have it, the stamp printers were just moving away from letterpress printing and wanted to move on to recess printing.

Goldschmied engraved his first stamp in 1925, it being the engraved version of the Masaryk definitive design introduced that year, thereby becoming the artist responsible for the very first engraved and recess-printed Czechoslovakian stamp. Goldschmied remembered that it was a troublesome start. He had to re-engrave the die many times as initial printing results were very poor. In the end, the lines had to be engraved so deep that the overall engraving suffered quite a bit. This led to the many types we find for this Masaryk definitive, making it one of the most popular Czechoslovakian stamps issues to specialise in.

Goldschmied disappeared completely from the scene after that one stamp, after other engravers were taken on who basically stole the limelight. Goldschmied's work in these years mainly consisted of either preparing or finishing off other engravers' dies. He only re-emerged in 1940, after the engraver Karl Seizinger had left Czechoslovakia for Yugoslavia at the end of 1938 and the engraver Bohumil Heinz had passed away in May 1940.

During the war, Goldschmied's work consisted of stamp engravings for Bohemia and Moravia. His most recognisable from that period will be the recess-printed version of the linden leaves definitive, introduced in 1941. With the linden leaves being a symbol of Czechoslovakia, it proved so popular, despite it being issued by the occupying authorities, that it survived the war and was reintroduced after the war as a Czechoslovakian definitive issue.

Other work Goldschmied did during the war is harder to attribute. The difficulty with his early work is that he may have been a skilled engraver, but Goldschmied relied on others to do the preliminary drawings for him. This could be the designer of the stamp but quite often it was a fellow colleague, Jindra Schmidt, who did this for him. With official records not divulging any information, some stamps may well have been attributed to Schmidt rather than to Goldschmied. 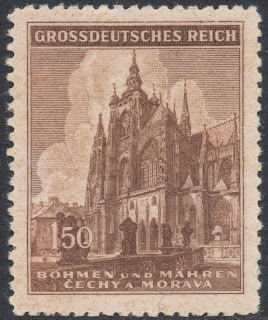 We therefore rely on signed material to guide us in this, although this may sometimes be more confusing than clarifying. There is, for example, a presentation sheet of the 1942 definitives for Bohemia and Moravia. These exist in three sizes which are all included on the sheet. The smallest size, represented by the 1k and 1k20 values, have been signed by Schmidt, with the other two sizes signed by Goldschmied. The SG catalogue gives Goldschmied for the engraver of the complete set, and it has been suggested that Schmidt signed these sheets as the creator of the drawings. But the annotation in pencil reads 'Rytinu zhotovil', which means 'Engraving carried out by', which might imply that it was Schmidt who engraved the smaller size definitives.

Maybe slightly less confusing is the case of the 1944 St Vitius's Cathedral stamps, again of Bohemia and Moravia, which has been discussed on the Stampcommunity forum some years ago. These stamps are generally attributed to Jindra Schmidt, but there is some evidence to suggest it may well have been Goldschmied who engraved these. Goldschmied often used to sign his engravings with a hidden G somewhere in the design. And exactly such a G has been found on the St Vitius's Cathedral stamp. Again, official records do not clarify anything so we'll probably never know.

This unclarity of who actually engraved what was a situation Goldschmied was familiar with, but he normally did not bother to clarify or rectify matters. The only exception being an engraving of Charles Bridge, which appeared in a booklet on Max Svabinsky by Jindra Schmidt, published in 1973. This was a popular engraving, so Goldschmied didn't want to let this one go. The matter evolved into an unpleasant dispute, which was ended only in 1977, by actually destroying the master die, so it could never be used again.

After the war, Goldschmied became part of a team of engravers for Czechsolovakia, engraving many stamps in the 1950s, 1960s and 1970s. To be honest, most of these stamp issues were of the rather mundane kind. It is possible that because Goldschmied relied so heavily on others to do the preparatory work for him, he was never asked to engrave any big ticket items such as the various annual Art series. And it was precisely issues like those which usually cemented an engraver's reputation and indeed fame.

And yet, Goldschmied remained active until the very last, with his final engraving, a value from a set marking the Sixth Winter Spartakiad of Warsaw Pact Armies being issued in February 1977, the year Jaroslav Goldschmied passed away at the age of 87.