on June 17, 2017
Pierre Béquet was born in Versailles, France, on 27 October 1932. He grew up in that beautiful place, close to the palace, where he, like all other local kids, used to play in the gardens, among the beautiful old buildings and fountains. From a very young age, he felt the urge to put down on paper the impressions he experienced from these relics from the past. 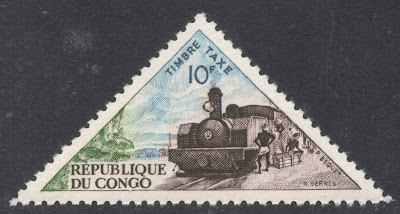 Béquet’s love of art was soon further developed through his visits to the studio of Paul Pierre Lemagny, teacher at the School of Fine Arts. At the time, he was only 12 years old. Lemagny taught Béquet how to move his drawing towards the art of engraving. Béquet soon fell for it, enjoying the rigorous technique involved. In 1948, Béquet went to the Ecole Estienne, where René Cottet taught him the art of engraving. Four years later he received his diploma. After that, in 1953, he entered the National School of Fine Arts in Paris, where he joined the studio of Robert Cami.

While travelling to the Provence as part of his studies, Béquet immersed himself in the world of art, lapsing it all up, the beauty of the surroundings, the light, the other artists around him. In 1955, he became an art teacher in Ville de Paris. He kept this post until 1958. From then on he would alternatively teach drawing and engraving at the School of Fine Arts in Mans. 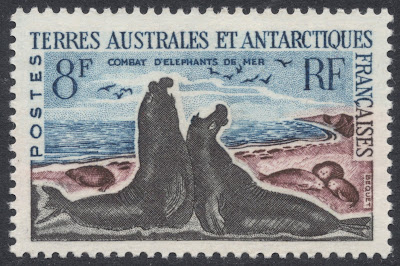 A long interval being conscripted in the French army was like a sombre blot on the picture, but Béquet returned to the province more mature, to ripen even further as an artist. That’s when he decided to try and obtain that coveted Prix de Rome. In 1960, he succeeded and winning the Prix de Rome opened up the doors to a philatelic career. With the famous stamp engravers Cottet and Cami having been his teachers, as well as having had his competition work judged quite often by Albert Decaris, that was a very easy step to make. These masters introduced him to the French Post. After having engraved a test piece, a portrait of the characteristic Grand Condé, he was accepted and, as was usual in those days, started to work on stamps for the French territories.

In 1961, Béquet engraved his first stamps: four values for the postage due issue of Congo. Soon after, he would become the principal engraver of the stamps of the recently founded French Southern and Antarctic Territories (FSAT). His first stamp assignment, that of the combating elephant-seals, issued in 1962, was the start of a close relationships with the territory and its stamps. He was given complete artistic freedom for each and every stamp, which he, as an artist, naturally enjoyed very much. And his talent was recognised three times, with the Grand Prix de l’Art Philatélique, for his 1965 ‘Discovery of Adélie Land’ stamp, his 1972 ‘Discovery of Crozet Islands and Kerguelen’ issue, and his 1976 ‘Cook’s Passage to Kerguelen’ stamp. 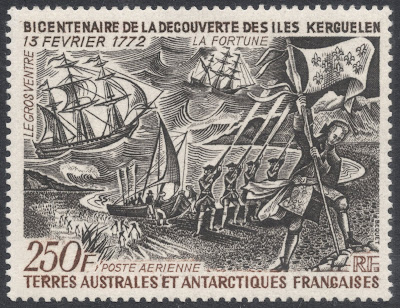 Even in the latter days of his career, when stamp issues were decided on locally rather than in France, he could still go his own way. Looking at the portrait stamps issued since the late 1990s, it becomes clears how Béquet was able to shape them as a series, giving them a unity in composition, even though they were issued as single stamps, with each portrait having its own characteristics.

In 1965, Béquet engraved his first stamp for France, the Youth Clubs issue. France’s guidelines for stamp design were so much stricter than Béquet was used to for the FSAT. All corrections demanded by the French Post had to be implemented or else the job would go to someone else. This is also why Béquet once said that a postage stamp can never be a true individual work of art. Because of various constraints, both technical and ‘political’, it is never the result of the artist’s vision alone.

It is therefore no wonder that his favourite French stamp was the 1972 issue to mark the bicentenary of the discovery of the Crozet Islands and Kerguelen. His essay was accepted and when he was asked how he would like to proceed, Béquet answered: by having my artwork accepted without any changes to the design and/or colours. This request was granted, and the stamp was eventually issued exactly how Béquet had envisaged it. 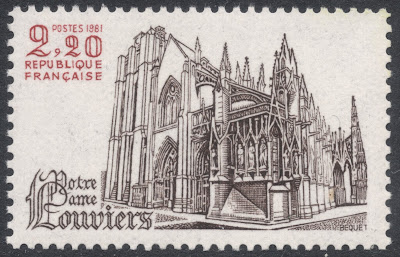 In 1973, Béquet’s close artistic links with Versailles spilled over in his philatelic work. The French Post had asked several stamp engravers to come up with ideas for the annual Art series. Béquet submitted a work by Charles le Brun, ‘Study of a kneeling woman’. Charles le Brun was the famous 17th century painter who decorated many of the halls in the Palace of Versailles. Béquet’s essay was accepted and the stamp was duly issued in 1973.

Another remarkable stamp from that Art series is Béquet’s engraving of the painting Volta Faccia by François Rouan, issued in 1991. The rather busy design gave Béquet quite some headaches. In order to translate the painting into a tiny engraving, he felt he really had to creep into the skin of the artist, to experience how the artist originally perceived and constructed his work. Luckily for him, the artist was still alive and the two co-operated throughout the process of creating the stamp.

The Art series underwent a major change with the introduction of the six colour printing press in the 1970s. For engravers this meant having to work on two different dies, each one for printing with three colours. The idea is to engrave both dies in such a way that the colours used for each will complement each other and create the colour variety which was aimed for. It is so much harder than merely mixing inks to create a colour. It meant that while reducing an art work to stamp format is a process of compromise anyway, even more needs to be compromised when it comes to colour. While performing this what Béquet called a circus balancing act for the 1976 stamp of De Vlaminck’s Still Life with Fruit, he got so caught up in that process that he never thought twice about where to put the lettering, which eventually ended up in such an awkward place that collectors and the general public alike constantly placed the stamp upside down on their mail. 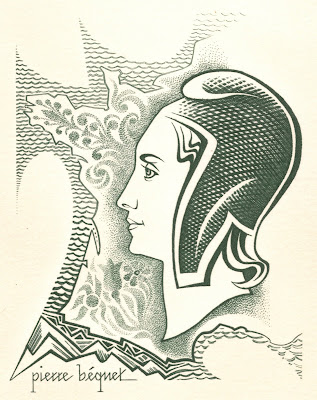 While working on that other long-running series of French stamps, those promoting tourism, Béquet got again the chance to model a number of stamps after his own ideas, creating a little miniseries within the series. The stamps in question are those depicting the Saint-Jean in Lyon and the Notre Dame in Louviers (both 1981) and Ripaille Castle (1982). Béquet engraved those three buildings in exactly the way one would see them when standing in front of them. Printed in monochrome against a white background, they really are like classic engravings and work both in that way, showing off the engraving quality, and in the way that they stand out from more usual depictions of buildings. For the Ripaille Castle stamp, Béquet received his fourth Grand Prix de l'Art Philatélique.

In 1980, Béquet founded the French Designers & Engravers Association 'Del & Sc'. He was its President for the first two years.

Throughout his life, Béquet remained a working artist outwith the scope of his philatelic work. Not only an engraver, he also worked a lot with metal sheets. Sometimes the two overlapped and his very personal style is reflected in a French stamp issued in 1995, with Lorraine’s iron and steel industry as its subject. Although the face detracts somewhat from the angular design (it was only added afterwards, on the express wishes of the French Post), the style is unmistakably Béquet’s. 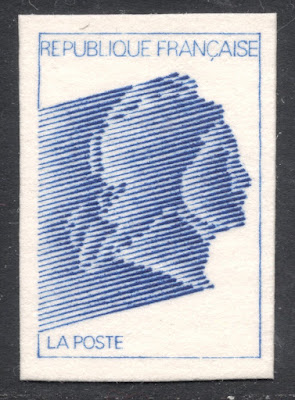 For all the hundreds of stamps Pierre Béquet designed and engraved, his name will remain forever synonymous with his Marianne stamp of 1971. Based on his wife Gisèle, the profile, which Béquet initially had wanted to leave blank, portrays Marianne as a woman sharing all our pain and pleasure. The extra-curricular engraving for the philatelic document shows that initial portrait design against the map of France. The iconic design would remain in use until 1977, when it was replaced by a design by Pierre Gandon.

But Béquet made more than just the one Marianne. In 1974, he submitted a design for his own successor, again loosely based on his wife’s portrait. An even more stylistic Marianne, rigid in shadow, yet subtle in light, as he himself explained. The design went all the way to the proof making stage, but was eventually not adopted. It would not be lost, however, for it featured on a French stamp of 1990 marking the 50th anniversary of De Gaulle’s Call to Resist. In the late 1980s, another Marianne die essay was submitted by Béquet. It got shortlisted but did not evolve beyond that stage.