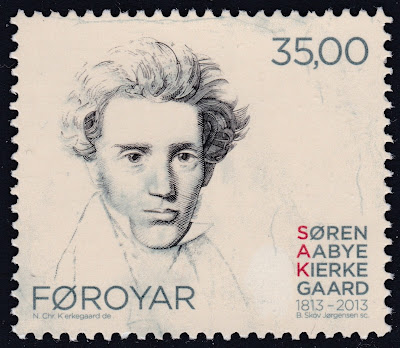 In 2013, Skov Jørgensen finally got the opportunity to engrave a portrait stamp. Both Denmark and the Faröe Islands issued a single stamp to mark the 200th anniversary of the birth of Sören Aabye Kierkegaard, the famous Danish philosopher. The portrait which was used on the stamp was based on an original made in a combination of pencil and charcoal. Even though Skov Jørgensen was very much in favour of using this particular portrait, it did create another challenge, apart from it being Skov Jørgensen’s first portrait engraving: the original drawing was ‘the softest of soft’, which makes it hard for an engraver to create lines which both honour the original and yet create enough tonal variety to be printable, especially on such a small format. By using a combination of freehand engraving and a more traditional style of cross-hatching, Skov Jørgensen has succeeded remarkably well in recreating a soft yet expressive portrait. It makes one long for more of the same, but unfortunately Skov Jørgensen never had the chance to create another portrait stamp.

Most of Skov Jørgensen’s work was for Denmark, but he also engraved two stamps for Greenland, in 2009 and 2010. They were issued to mark the centenaries of Danish stations; the 2009 stamp had the North Star mission station as its theme, and the 2010 stamp the Thule trading station. They stand apart for their rather remarkable imagery. 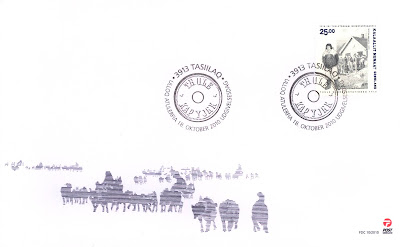 The idea had been to create a juxtaposition of archetypal people in the foreground and a background which reflected the never-ending whiteness of the Greenlandic landscape. The unusual use of lines was to create an effect of flickering snow-blindness. Originally, the background image was to spread out over more than one stamp, but halfway through the process it was decided that more captions were needed (in both Danish and Greenlandic), which necessitated a reduced background. The idea of a multi-stamp background was abandoned, and the whole effect of being blinded by the brightness of the snow was kind of lost. Fortunately for Skov Jørgensen, he was able to fully realise this design idea on the accompanying First Day Covers which, though not engraved, proved very successful.

Among his own favourites Skov Jørgensen counts the 2010 Ribe stamps, for obvious reasons. Once again, we find an issue which links back to Skov Jørgensen’s own life. The two stamps, marking the 1300th anniversary of the town, depict the statue of Queen Dagmar and part of Ribe Cathedral, the very same where Skov Jørgensen’s grandfather was Bishop. Ribe also happened to be where Skov Jörgensen first moved to after leaving the nest.

To be continued!
Biographies Skov Jørgensen