Although never a real stamp collector himself, Skov Jørgensen had always wanted to design a stamp. He admired the crystalline clarity of banknote and stamp engravings, and wondered at the possibilities to cram a whole universe of imagery onto such a small format. What also attracted him was that the art of a stamp or banknote engraver was available to be appreciated by a large audience, completely transcending the somewhat confined group of art lovers. 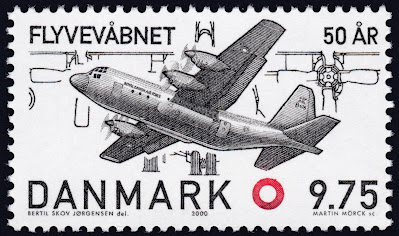 And so Skov Jørgensen jumped at the chance of realising this dream when a professor of his, who happened to be a member of a stamp advisory board of the Danish Post, recommended him when a designer was sought for the upcoming stamp to mark the 50th anniversary of the Royal Danish Air Force in 2000. Skov Jørgensen was invited to design the stamp, which would eventually be engraved by Martin Mörck. The stamp is known for its line of minute microprint running along the top of the plane, but this was something not originally included in Skov Jørgensen’s design. Rather, it was added later by the postal authorities. (Skov Jørgensen did get to engrave his share of microprint some years later, when he engraved a value from the 2010 set celebrating the 500th anniversary of the Royal Danish Navy, and found the experience rather challenging!) At the time the Danish Air Force stamp was issued, Skov Jørgensen was living in Rome and he first saw his stamp on a bill which was sent to him from Denmark. It was almost, he said, as if the bill was that little bit friendlier…

Fast forward some five years and we find the Danish Post without a ‘home-grown’ engraver. Their master engraver Arne Kühlmann Hansen had just retired, leaving them only with Martin Mörck to do work for them. This situation was deemed both undesirable and unsustainable and attention once again turned to Skov Jørgensen. In 2005, he was offered an apprenticeship of sorts under Martin Mörck who lived in Copenhagen at the time. This was the start not only of Skov Jørgensen’s career as a stamp engraver, but of a lifelong professional and personal friendship between the two men. 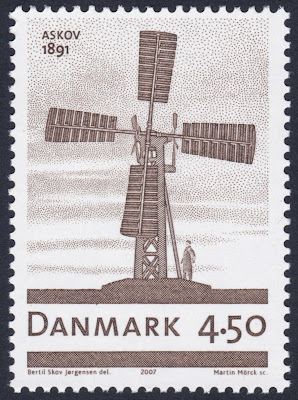 In the years leading up to Skov Jørgensen’s first actual stamp engraving, he was initially given the opportunity to prove himself by having to design stamps which would be engraved by Mörck. These designs would be in the shape of so-called key-line art. That is to say, the design would be drawn in such a way that the lines which the engraver should engrave are all included. The stamps, a set depicting various old and modern windmills, were issued in 2007. It included a 4k50 value depicting the Askov windmill, which Skov Jørgensen could see from his bedroom window when he was a child.To be continued!
Biographies Mörck Skov Jørgensen