on April 28, 2021
It's funny how you sometimes think you've studied a stamp quite exhaustively, only to find out there's so much more to learn about it! That's what happened to me the other day when I read a blog post on the Dutch Postzegelblog, by Cees Janssen. The post is about the 1947 Austrian stamp to mark the centenary of the Austrian Telegraph, a stamp engraved by Herbert Toni Schimek.

Now it is quite a remarkable engraving, especially when you look at the globe. The illustration is built up with an array of ever larger circles; and by varying the thickness of those circles, the actual illustration is created. This was a tribute to the French engraver Claude Mellan (1598-1688), who was instrumental in developing the technique of copper engraving, which would later become the technique used for stamp engraving. Mellan's most famous work was The Head of Christ, which was an engraving built up with just the one single line, going round and round in circles. 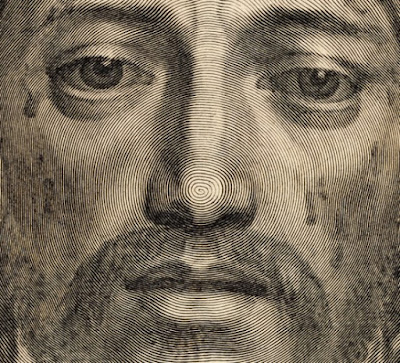 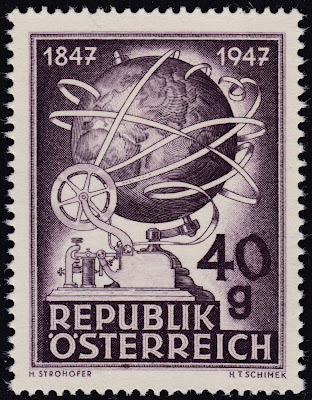 The code reads _ _ _ .  . _ _ .  _ , which is ÖPT. This stands for Österreichische Post- und Telegraphverwaltung (Post and Telegraph Administration). So that makes this stamp stand out even more. I've since found out that the variations are catalogued by Michel, and that they can be found relatively easy on various sites, so it's perfectly feasible to get the set of three. With the one variation being in position 17 , it may even be possible to find a top marginal sheet part which will confirm its position, so I think I'll wait for one of those to come along!
:-)
Adrian
Chat Schimek