on February 14, 2020
John Archer was a nineteenth century American engraver who worked at the American Bank Note Company. In 1861, he moved to Richmond where he met the wealthy politician Joseph Daly. Together, they founded the printing company Archer and Daly. It took them a few years, but in 1863 they were up and running. 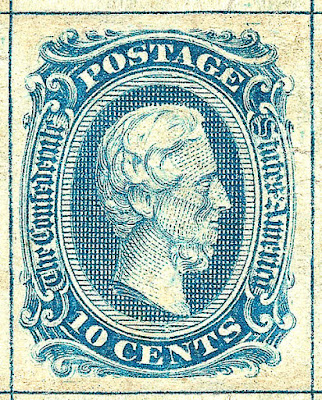 That was just the time, the Confederate Post Office Department was looking for local engraving talent, as they were fed up having to rely on inferior foreign stamp engravings. So Archer and Daly got the job and Archer got to engrave the 1863 definitives for the Confederate States.

The production of the first printing plate was rather peculiar in that first the steel plate was divided into 100 stamp-size rectangles, into which the stamp engravings were transferred. These stamps are now known as the "framed" stamps.

Besides, the quality of the actual steel plate was so bad that each and every stamp had to be retouched before printing could take place, making it possible to plate the whole printing sheet.