on October 07, 2019
Kirsten Lubach was born in Troisdorf, West Germany, in 1973. At the Academy of Drawing in Hanau, she studied engraving. After that, she got a scholarship from the Carl Duisberg Foundation to further her studies in Finland, at the Muotoiluinstituutti in Lahti, where she passed her exams in 1999, becoming a master engraver. 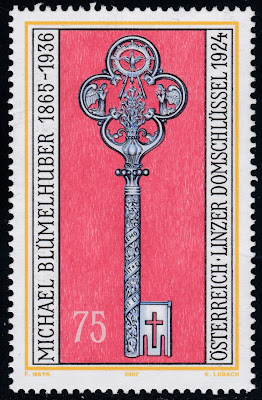 For a couple of years she worked as an engraver for various firms, until she started working for the Austrian State Printing Office in December 2003. While initially employed to correct and retouch printing plates, Lubach went on to engrave a number of stamps as well. Her first appeared in 2006; a single value depicting lynx, from the annual Austria’s Fauna series. This was followed in 2007 by her second and last engraved stamp for Austria, on which she engraved a work of art from the master engraver Michael Blümelhuber. Lubach also engraved some seven stamps for other postal authorities.

The subject of nature closely relates to Lubach’s private work. She has her own studio, where she designs, draws and engraves. Flora and fauna make up a large part of her private art, although she also engraves portraits and buildings. Only this year (2019) she engraved the spire of the New Cathedral in Linz, the prints of which are a present to those who donate to its restoration fund.

The Austrian Post no longer issues hand-engraved stamps, but Lubach has not severed her ties with the organisation. She is still active as a stamp designer.