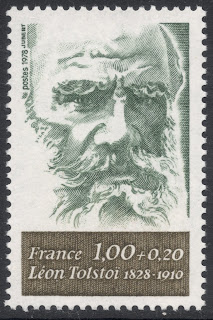 Jacques Jubert was born in 1940. Like so many of his fellow engravers, he attended the Ecole Estienne, from 1954 to 1958. Subsequently he went to the Ecole nationale supérieure des arts décoratifs (ENSAD).

Jubert's first stamp, issued in 1978, was for the annual Red Cross Fund series, which focused that year on celebrities. Jubert engraved a stunning portrait of Leo Tolstoy, marking the 150th anniversary of the man's birth. It seems incredible, but Jubert never developed into a true portrait engraver.

He did, however, prove his engraving talents, and then some, for in 1986 he was declared 'Meilleur ouvrier de France', a prestigious title handed out once every four years to the best artist/artisan of France.