on April 07, 2018
Here's a little divertimento for you this week. I presume you may well be as fascinated by (not to say pleasantly obsessed with) engraved stamps as I am, but there are always those who manage to take this one step further. One of those is this Ed guy from Canada, who's whiling away the long and cold winter months making collages of engraved stamps!


He sent me a few the other day and I think they're absolutely fab! So he agreed to me showing them here to you, so you can enjoy them as well. Apparently, he's been at it for years, starting out the old-fashioned way, with scissors and glue, but with the advent of the computer, life became that much easier. He now spends some three to four hours on each one of them, and he's already got over a dozen. The hardest part, so he told me, is finding a suitable base stamp to work on.


As you can see, some are done with stamps from a single engraver only, such as Decaris (I especially like that one) or Slania. Others are more widely sourced. I like the crowded room stamp, and even though I looked very hard I never even spotted the pussycat near the corner. I thought the pleading guy looked like some sort of shoeshiner but apparently he's just trying to get hold of his cat again. 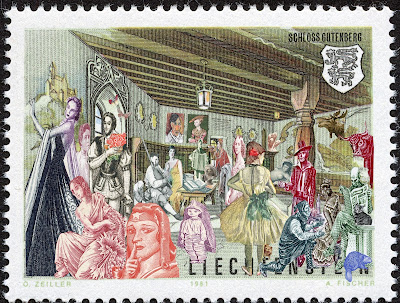 It's incredible how many stamps are used for a single collage. Yes, I'm leading up to a test of your philatelic knowledge here! Below you find a collage which includes elements of 29 different stamps, excluding the base stamp used. Can you find and source them all? Have a try, and I'll give you the answer in a fortnight. 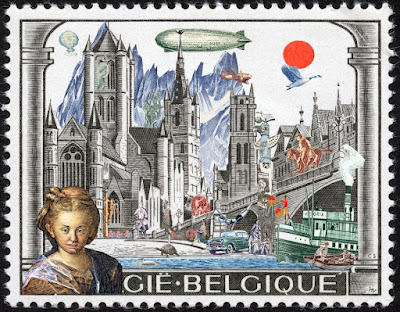