Lyell Lance Dolan was born in Melbourne, Australia in 1942. His primary education was first at a private school and later a public school. His parents saw that he was good with his hands, making things and creating art. They figured it would be beneficial for Lyell to go to a technical or trade college. He did finish school, including an apprenticeship course in fitting, turning and engineering, but it wasn’t what he wanted to do as a career.

His major hobby, or even passion, was drawing. Influenced by the art of his grandfather’s, which he loved, much of his work was in pen or ink. Dolan was especially fond of drawing portraits. Fortunately for him he saw a position advertised for a trainee artist engraver at the Commonwealth Bank Note Printing Branch. He showed them a portfolio of his art and subsequently got the job. Dolan started working for them in 1959, when he was only 16 years old.

At the time, the printing branch was responsible for all security documents for Australia and its territories. The Art Department, where Dolan worked, consisted of five men whose tasks varied from original rough concepts to approving print quality for production to commence, and every step in between. There was no specialisation, all tasks had to be performed by all employees.

Dolan remembered there was no formal schooling when it came to engraving, you just learned on the job. It would typically take five to seven years to be trained well enough to be allowed to tackle special features such as portraits on stamps or banknotes.

All art for the portraits and vignettes was first done in pen & ink, in approximately 4 to 9 times the actual size. The completed artwork was then photographed, reduced to the actual size and then transferred to the steel plate as a guide to the engraver. This was done with an electric charge, creating a light acid stain on the surface of the steel.

Dolan had to learn a whole new technique when he was taught how to hand engrave, compared to his drawing techniques. He had to learn how to use acids and ruling machines for creating patterns and feathering of etching to create graduated ‘sky effects’ for stamps. An extreme and precise hand-to-eye coordination was needed. He made all his own engraving tools and started off with a jeweller’s eye glass with up to ten times magnification. Dolan remembered really having to hold his breath for the finer work. In the 1970s he started to use a Zeise stereo microscope which had up to forty times magnification, using both eyes. This was a great help when it came to accuracy.

Between 1965 and 1973, Dolan did various art courses. Not that these were required by his employer, he just wanted to do them to gain a greater experience with different areas of art. Most of his courses were on graphic art and design. In 1967, he completed a 'Certificate of Art' course. Two years later, Dolan started a five-year Diploma Course, majoring first in Sculpture, which he later changed to Graphic Art & Design'. He completed the course in 1973, after having won the Masius-Wynne Award for Best Advertising Student in 1971.

During that time, he also entered the United Nations World Design Stamp Competitions several times. He was awarded a memorable mention twice, in 1967 (his first attempt) and 1974 (his final attempt). In 1968, his design became third, and in 1972, his design was chosen for a 9c airmail stamp and accompanying card.

Dolan's first stamp work appeared in 1966, as part of the new Australian definitive set in their new decimal currency. The high values of this set made use of the existing designs of the high value stamps portraying navigators issued in 1963-1965, but now with decimal denominations. For this, new dies were pressed of the original dies, and on this the old denominations and surrounding areas were removed, leaving flat polished surfaces onto which the new values could be engraved. The new values were traced from reference onto a gelatine film, and then rubbed onto the dies as a guide for the new engraving. Dolan worked on the 75c Captain Cook stamp and the $2 Bass and Whaleboat stamp.

Dolan believes that his portrait work is his best. Working with photographic references, he preferred to start with making a tonal drawing with pencil, to capture a particular look, then use that drawing to make the final pen and ink artwork. The challenge is to create with ‘line’ the effect of continuous tone, whereby security aspects, traditions, aesthetics and printability also need considering. What he likes about doing portraits is the feeling he’s getting into their individual personalities. He enjoys capturing the likeness, beauty, strength of a person.

From the late 1960s on, Dolan worked on a number of portraits used for the ‘Famous Australians’ issues. These were small-format stamps issued in booklets. From the first booklet, issued in 1968, Dolan is fondest of his portrait of the artist Albert Namatjira. He remembered doing the concept design in a rough pen and ink style, very much the style of his private art work at the time. Even though the postal authorities wanted him to do the final portrait in the traditional lines and dots style, Dolan stuck to his guns and engraved the portrait in his own rugged style which, according to him, suited the character best. 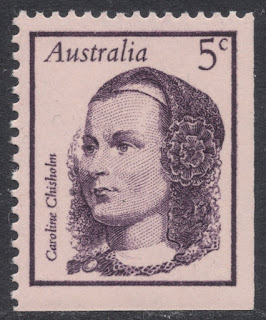 In complete contrast, the portrait done of Caroline Chisholm, from that same booklet, was a very delicate and refined engraving. Dolan remembered liking it very much having to engrave the soft feminine features and the beautifully detailed lacy head dress.

Another stamp from that series Dolan remembers particularly, is the 1970 stamp featuring the portraits of the Duigan brothers, the two aviation pioneers. It was quite a challenge to position the two portraits on such a small stamp and leave enough detail to engrave to make the portraits lifelike.

Dolan used to love it that the work he did for stamps was available to the general public so quickly. When engraving bank notes it could sometimes takes years before they appeared, but stamps were issued very quickly after having been made. He always used to run down to the post office on the day of issue, and get some first day covers or even full sheet of his stamps in, to keep as a momento.

Dolan's work extended to banknote engravings as well. As with his stamp work, the first banknotes he got to work on were the ones issued during the decimal changeover of Australia’s currency system. Of note (pardon the pun) is the portrait Dolan engraved of Sir Douglas Mawson. Not only is it the largest portrait ever engraved for an Australian banknote, it is also the last Australian banknote portrait ever to have been hand-engraved.

While acknowledging that newly developing computer techniques may be an exciting thing for artists and designers, Dolan does regret the general phasing out of hand-engraved stamps. For him, there is something special about a hand-engraved stamp; evoking quality, class and sophistication which you don't get from other stamps, no matter how attractive they may be in their own right. But with the whole process of hand engraving and subsequent printing plate production taking many weeks, Dolan does understand the economics of it. While on the job, though, it was just one of those things you had to accept and live with.