After Skov Jørgensen had been practising for a while to become a stamp engraver, he felt he finally made a breakthrough with his ‘spark plug’ practice piece, created in 2007. The image has a minute caption reading ‘600%’, and when Skov Jørgensen finally managed to represent the % sign with actual circles rather than mere dots, he realised he was ready for the smaller parts of an engraving needed for stamp work. 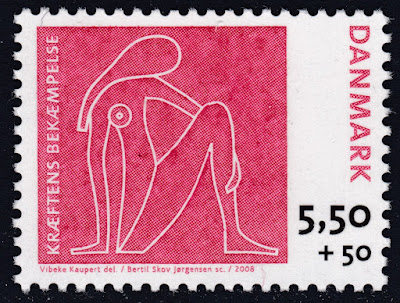 In 2008, Skov Jørgensen at long last got to engrave his first stamp; a single value promoting the Breast Cancer Awareness Campaign. He remembers it being a hard task. The design consists mainly of large areas of cross-hatching, which asks for a very steady hand, because any wobbly lines would stand out immediately. But it was a good exercise, because the ability to create an area of cross-hatching is considered the basis for everything else during the training of an engraver. While in the old days such areas were often created with etching rather than engraving, Skov Jørgensen is proud to state that his work was purely engraved. 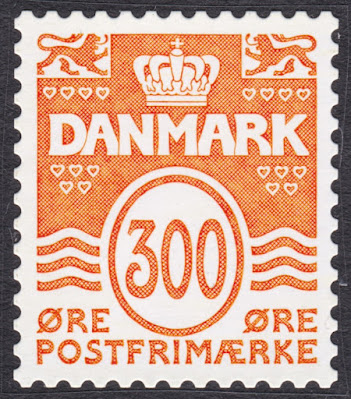 Purportedly, Skov Jørgensen’s work would simply be the engraving of the new value, but as always there’s more to it than meets the eye. Skov Jørgensen explained that Martin Mörck had engraved a mother die which was based on the existing older versions of the stamps. His engraving was to a depth of 75% of what was desired, leaving the part of the value blank. This die was subsequently transferred to a new steel plate, onto which Skov Jørgensen could engrave the actual value. Skov Jørgensen would then also engrave the final 25% of depth and width of the whole design.

While in the old days, an original engraved die may have been fully finished before creating auxiliary dies to add the value on, this process of first engraving to 75% makes sense. The problem is that when creating auxiliary dies by transferring the mother die to a new steel plate, there’s always a loss of sharpness, because the v-shaped bottoms of the lines become more rounded in the process, resulting in a less distinctive impression in the final print. While it would be possible to repair the rounded line bottoms, this cannot be done without also widening the lines, creating its own problems. All this can be prevented by not finishing the lines in the first place, so that on the auxiliary die the lines can be finished, thereby preserving their sharp v-shaped bottoms and therefore sharper eventual print.